1840s: Beginning of the Black Press in Ohio

The Palladium of Liberty is the first newspaper published by Black Ohioans to promote African American civil rights in Ohio. David Jenkins and other Black community leaders launched the Columbus-based weekly on December 27, 1843. They published the paper in total of 32 issues until financial deficiency forced the editors to cease its publication on November 13, 1844. Its motto was “Devoted to the Interests of the Colored People Generally.” The newspaper was widely circulated in the state of Ohio, especially amongst large Black communities in urban areas, as its long lists of agents and subscribers demonstrate.

The Birth of the Palladium of Liberty in Ohio

The Palladium of Liberty was established by the resolutions of two African American citizens’ conventions in the year of 1843, where David Jenkins attended as an Ohio delegate and organizer: the National Convention of Colored Citizens, held in Buffalo, New York in August 1843, and the State Convention of Colored People in Ohio, held August 10th through the 12th, in Columbus. This indicates that the birth of the Palladium of Liberty was made possible in pre-existing networks of the Black press such as Ray’s The Colored American (1838) and Robert Banks’ Weekly Advocate (1837). The inaugural issue of the Palladium of Liberty included the convention speech on the first page:

WE ARE AMERICANS; and as Americans, we desire all the rights and immunities of American Citizens . . . . Give us, fellow countrymen, citizenship in fact, and America will not rank among her friends and supporters, more firm, more patriotic, more devoted men to her true interests, in peace and in war, than her colored sons. . . . We do not ask you to abolish your form of government; but we ask that you would repeal all laws and parts of laws that make a distinction on account of color, and which degrade us on that account.[1]

This speech shows that the newspaper aimed to achieve Black Ohioans’ civil rights as equal to their fellow white citizens. Like many other Black periodicals, the Palladium of Liberty proposed to promote the country’s recognition of African Americans as citizens who must deserve government-sanctioned freedom and rights, beyond the abolition of slavery. At the beginning, the Palladium of Liberty had total executive committee members under David Jenkins’ leadership, which reduced to 7 by the third issue, as well as 39 local agents, 18 agents outside of Ohio, and 14 traveling agents.

"We received the pretty sheet lately gotten at Cincinnati, called the 'Disfranchised American;' but not in time for our other number. This paper is to discuss the following grand topics: Moral Reform, Education, Temperance, Industry, Mechanism, Agriculture, POlitical Elevation, or the removal of illegal disabilities, News and Miscellany. We know the Gentlemen of the Committee, under whose supervision it is to be conducted, as well as the leading Editor. We say upon the whole, it will, not doubt, partake of the right spirit."

Its editors were Alphonzo M. Sumner, Owen T.B. Nickens, William N. Yancy, Rev. Thomas Woodson and Gideon Q. Langston. Except Nicken, all the editors of the Disfranchised American also served as local agents for the Palladium of Liberty. This indicates that the two newspapers maintained a symbiotic relationship for their sustainability rather than competing for their limited readership.

The End yet Opening for More Papers

The number of subscribers and advertisements noticeably decreased starting around July 10, 1844's issue, and finally the executive committee of the Palladium of Liberty ceased to publish the paper with its last issue on November 13, 1844. While the list of subscribers diminished, the newspaper still encouraged them to pay their dues, especially when Black Ohioans gathered at the State Convention, held in September in Columbus. The editors considered the Convention as an opportunity to ascertain the survival of the Palladium of Liberty. In addition to the Convention, the executive committee tried to make up the financial deficit by hosting guest lecturers donate their time and expertise to the Palladium of Liberty. For example, the newspaper announced Dr. E. R. Lewis’s lecture on Phrenology, adding “The money to be appropriated to the Palladium of Liberty” on the September 25th issue. In spite of all these efforts, the uncertainty of the newspaper’s future became obvious, as the few remaining advertisements in the later issues ran outdated.

We can read the Palladium of Liberty by one dedicated subscriber who saved most of the issues and preserved the newspaper until the year 1885 when the Ohio Historical Society, now the Ohio History Connection, opened. The story of how the collection was donated to the Society is unknown.

You can learn more about David Jenkins and agents, and the 1840s readership of the Palladium of Liberty in the following pages. 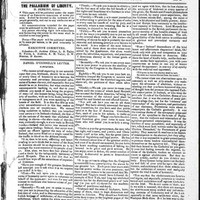